* In case of any delay in receiving the OTP, you may verify it later. Please proceed without verification.

Enter your City name or Pincode

Fatehgarh Sahib is one among 22 districts of Punjab, a northern state in India. Chandigarh, the capital of Punjab is 44 KM away from Fatehgarh sahib. It is towards east from Chandigarh. Its existence as a district is only 23 years old. It got the status of a district on an auspicious day of Baisakhi, 13th April 1992 and had been named upon Sahibzada Fateh Singh, the younger son of 10th Guru Gobind Singh. 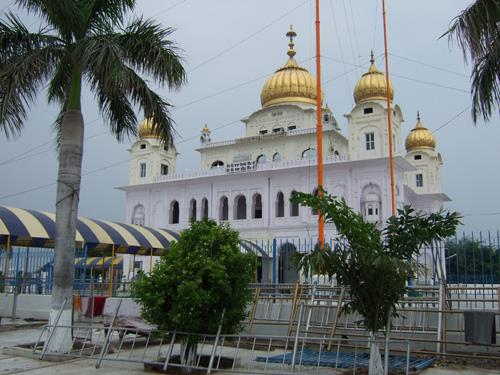 Fatehgarh sahib is a religious place of worship, especially for the Sikh followers because of the martyrdom of two younger son of 10th Guru Gobind Singh. Here is a place, where both, Sahibzada Fateh Singh and Sahibzada Zoravar Singh had been bricked alive in to a wall. It happened in 1704. But, these efforts were not enough to kill them as that wall collapsed. Later in December 1705, they both were killed at Sarhind and later Gurudwara Fatehgarh Sahib was built in their memory and honor. That wall is still preserved in this Gurudwara.

Fatehgarh Sahib is a part of Patiala Division and its exact location is between  30.38°North latitude and 76.23°East longitude. As far as latitude and longitude of Fatehgarh Sahib are concerned, it respectively lies on 30.6 and 76.3. An elevation range of this city is 274 meters to 260 meters. This city is adjacent to Ludhiana and Roper in North while Patiala is located in south direction of this city. Its boundaries touch some parts of Ropar and Patiala in East. Some parts of Ludhiana and Sangrur are located towards west of this city. In Fatehgarh Sahib, the months of March to May are always supposed to be warm enough. It’s a peek period of summer season and thus average temperature during this season ranges from 20°C to 45°C. Monsoon season is the best time to visit this city. The period of this season begins in the month of June and it ends in September. The weather remains pleasant during this season. As far as winter season is concerned, it starts in the month of November and finishes with the month of February. It leaves the people shivering a lot as temperature during this season is recorded from 2°C to 26°C.

Fatehgarh Sahib is a place where different festivals are celebrated with equal harmony. This is what something shows a strong unity among the people belong to different religions and culture. Whether any festival or event has a connection with Hindus or Sikhs, religious sentiments are always respected by people. Some of the festivals celebrated by inhabitants in this district are Baisakhi, Holi, Diwali and Lohri etc. During the month of December, Shaheedi Jor Mela is also celebrated in this district. It is an event celebrated in the memory of martyrdom of two younger son of Guru Gobind Singh. It is organized every year from 24th to 26th December.

This district holds a special place in the history of Sikh religion. Tourists find this place has various destinations of their interest. It is not only about a particular religion as it is a place belongs to rich cultural and religious heritages like Aam Khas Bagh, Sanghol, Gurudwara Fatehgarh Sahib, Sant Namdev Temple at Bassi Pathana, Mosque of Sadhana Kasai at Sirhind, Mata Chakreshvri Devi Jain Temple and Shahgird Di Mazar etc. Innumerous cities in this world attract huge numbers of tourists every year. If it becomes possible then simply due to having good numbers of tourist spots. Whether the places belong to history, rich culture, religion, mythology etc, it always remains enough to make the tourists more and more curious about knowing and visiting those places. Fatehgarh Sahib, situated in Punjab is also a city where large numbers of people from all over the world visit and experience its great heritages, situated in different forms such as Gurudwaras, temples, museum etc.

Archeological Survey of India (ASI) has an authority of maintaining Sanghol, a tourist attraction in Fatehgarh Sahib, related to Harappan Civilisation. Lots of antiques were found during the excavation at Sanghol and all had got the place in Sanghol Musuem. Upper portion of this museum is full of stone sculptors which are supposed to be the prime attractions of museum. There is a display of Maps, charts, drawings, photographs, charts and graphs too. This museum displays different forms of art belonged to Kushan period. Collections of coins and pottery have also been displayed in this museum. Scholars can explore all the sections of different arts, displayed in this museum. It requires them getting permission from authorities. As far as visitors are concerned, they can go through only few art sections.

It is also among main tourist spots of Fatehgarh Sahib. It had been constructed during the reign of Mughal Emperor Shah Jahan. He used to stay here during his travel to Lahore. There are more places constructed nearby this Aam Khas Bag and all these places comfort Mughal rulers during their stay.
There is a Sheesh Mahal, Hamam and tank which had a system of heating the water. According to one belief, there is a system of cooling an air too.

Distance between Fatehgarh sahib and this temple is only 6 kms. Bassi Pathana is a place where it is situated. This temple is supposed to be highly famous in this city as it belongs to Sant Namdev, who actually belonged to Maharashtra and visited Punjab during one of his itineraries. This temple was previously famous by the name of Swami Namdev Ji Ka Dera. The construction of its present day structure was completed in the year 1925. Large number of devotees visits this temple and a three day fair also takes place during the time of Basant Panchami.

The saga of Mata Chakreshwari Devi took place during the period of Raja Prithvi Raj Chauhan. The location of this temple is Sirhind-Chandigarh road in a village called Attewali. According to one popular belief some pilgrims had purchased an idol of Mata Chakreshwari Devi, who followed Lord Adinath ardently. It happened when they were going to Jain Temple in bullock carts. After stopping and spending one night, when they resumed their journey next day, the cart, Mata Chakreshwari Devi idol was kept in not moving at all. A sudden announced from the sky had took place, “Let this be my place of Abode”. Large numbers of devotees visit this pious place and their number becomes incalculable during a religious function which is yearly celebrated on the fourth day post Dusshera.

Haveli Todar Mal lies within the premises of Gurudwara Fatehgarh Sahib. Its construction took place in 17th centuary. It is also popular as Jahaz Haveli or Jahaz Mahal. Diwan in the court of Nawab Wazir Khan, Todar Mal was a great admirer of Guru Gobind Singh Ji. The beauty of this haveli has been enhanced with varieties of fountains and pools. Its every single structure is enough to prove that how brilliant its architect is. There is space of receiving guests and meeting people and it is too much spacious.

Here is a place, Mandi Gobindgarh where huge numbers of steel rolling mills are working and this is why it is considered as the Steel Town of India. This district is also famous for having large numbers of manufacturing units of sewing machine parts, centrifugal pumps and mining machinery. Local food suppliers make sure of purchasing the products in bulk and due to their heavy investments, agro and food sector has progressed a lot. It certainly makes this sector a highly profitable one.

Development of any city remains incomplete without having appropriate health care arrangements. As far as Fatehgarh Sahib is concerned, here, the standard of health care infrastructure is not very much superior in the comparison of any metropolitan or big city in India. Still, it is quite satisfactory, especially when the population of this city is keep growing. It is a city where treatment is available in government as well as private hospitals. Medical facilities in all the hospitals of Fatehgarh Sahib meet the demands of required treatment.

There are number of hospitals and nursing homes in this city. Ambulance services are also available for 24x7. Here, all the hospitals have emergency ward, so that patients can get quick treatment if their health condition is getting worse. Not only emergency ward but facilities of various other wards are also available in almost all the hospitals. High cost of medicines is really a reason to worry but here, people easily find almost all the generic medicines available at lower price. Government hospitals thoroughly fulfill such requirement.

Any sort of generic drug can also be purchased in this city. It really comforts people who cannot afford branded medicines simply due to their high cost. Though, Fatehgarh Sahib is not a metropolitan or big city, it does not mean that here, chemists do not have expertise towards their field. Chemist shops in Fatehgarh Sahib also meet various other requirements of persons. Whether it is any type of branded cosmetic product like body lotion, face cream, face wash or any herbal cream, oil and shampoo etc, everything is easily available in chemist shops.

Laboratories in Fatehgarh Sahib do not lack modern arrangements at all. It is something proves very much essential and important when it comes to check any blood sample or sample of urine or stool accurately. It is not enough as people also find other facilities in labs such as ECG, MRI, X-RAY and ultrasound. Not only liver and kidney function tests are done here but blood samples are also checked to find out any type of allergy in human body. HIV, TB and typhoid tests are also done in the labs working in Fatehgarh Sahib City.


Gynecologist and Obstetrician in Bhagalpur

Health care is definitely a highly important matter for every human. It becomes extremely important for a pregnant woman as she is supposed to take various sorts of precautions during her pregnancy period. In fact, she also needs to follow it after giving the birth to her child. Such is matter appropriately handled by gynecologists and obstetricians. These are the specialists; suggest advices to pregnant women post getting their check up done. It certainly helps in taking their care very well. This city, Fatehgarh Sahib also has qualified and experienced gynecologists and obstetricians. So, girls or women can easily approach them and get their expert opinion to live a trouble free life.

One would have to go to Chandigarh from Fatehgarh Sahib to catch the flight as Chandigarh International Airport is the nearest from this city. Anyone can easily reach this airport after one hour drive only. Flight services, for all the prime cities like Delhi, Mumbai, Ahmadabad, Bangalore and Goa etc are available on this airport. Whether its arrival or departure, people have the options of travelling through in airline such as Air India, Kingfisher Airlines, Jet Airways, Jagson Airlines and Air mantra etc. There is a Railway Station in the city, Fatehgarh Sahib and all the major cities of India like Delhi, Mumbai, Surat, Lucknow, Jammu and Kolkata are connected to this place through Railway Tracks. Buses from Fatehgarh Sahib to various parts of india are run by Punjab State Road Transport Corporation. Services of few private bus operators can also be availed. Road distance from fatehgarh sahib to Ambala is 53 KMS. Delhi is 271 KMS away while Ludhiana is 62 KMS and Shimla is 204 KMS away from this city.

Comments / Discussion Board - About Fatehgarh Sahib